While doing the research for my episode on the Old Yorkville and Murray Hill Reservoirs (click here for that!) I came across a few other odd and interesting stories of New York City and Central Park.

Located in the southwest area of the Park is the Swedish Marionette Cottage, which currently stages marionette plays for the young or young at heart. The sign outside the Cottage will tell you that the building was initially built in Sweden and sent to the US in 1876 for the Centennial Exposition in Philadelphia. After the Exposition ended New York City bought the cottage and Central Park co-designer Frederick Law Olmstead oversaw its placement on its current location. All of that is superficial, but what you may not know is the Cottage’s connection to polar exploration.

Swedish engineer S.A. Andrée would achieve notoriety in 1899 for his attempt to become the first man to reach the Pole. His chosen method?  Flying a balloon from Sweden north across the Arctic.  His interest in dirigibles had already taken root by the time of the Exposition but he had never seen one in the flesh, much less flown one. He decided to travel to the States to attend the Exposition so he could learn about balloons. The Swedish embassy was unable to get him passes to the Fair or lodging, but in exchange for taking a janitorial position at their exhibit they would allow him to sleep on the second floor of the cabin and he could attend the fair when he liked. Over the next several months he lived in the cabin, kept the exhibit clean, and learned ballooning from noted balloonist John Wise. Andrée would make his attempt at the Pole but would never reach it, the expedition ending under tragic and mysterious circumstances. The Marionette Cottage provides a solid (and eerie) link to an explorer who sought to push the limits of aviation and exploration. 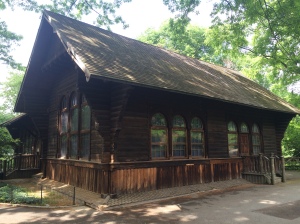 A little further north, just inside the park at 86th St. and Central Park West, you’ll find a curious layout of stones laid into an otherwise empty section of lawn. These stones were previously the foundation of a house in Seneca, a small town that existed in present day Central Park between what would have been 81st-89th Streets and Seventh and Eighth Avenues. The settlement was founded in 1825, a rural, middle-class, primarily African-American community, something very progressive for the time. Its residents remained until 1853 when, to make room for the northward-stretching construction of Central Park, the City bought them out. All that remains are the outlines of a single cottage’s foundation. 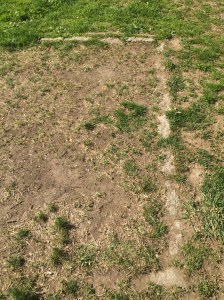 In 1812 John Randel, Jr. set out to survey the entire island of Manhattan with the aim of establishing a grid of streets and avenues on the island as New York City continued to expand north. His survey is the basis for Manhattan’s layout today although almost no trace of it remains today. For those seeking a link to this groundbreaking (see what I did there?) survey there is one of the original survey markers remaining in Central Park. At the time Randel was surveying the island Central Park wasn’t even a twinkle in the City Planner’s eye, so Randel surveyed the area that would become the Park in the same grid as he did the rest of the island. Almost all of his markers were later removed when Olmsted and Vaux altered the area to create the Park, but this marker (being at an innocuous location and hammered into a solid piece of Manhattan schist) managed to survive the bulldozer. It’s an unspoken agreement among New York history buffs not to advertise exactly where the spike is so I won’t publish the exact location here, but a little research and some time looking around will allow you to find it. 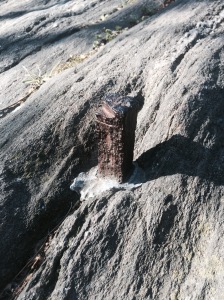 A little bonus tidbit: most people who walk through Grand Central Terminal (myself included!) are struck by the grandeur of the ceiling. While many people know that the ceiling is actually painted backwards (the exact reason for this is still debated) what most don’t realize is the Main Concourse is not the only place to find stars in the Terminal. On one side of a vaulted ceiling in an area currently housing a liqueur store you can find this quiet, elaborate little mural: 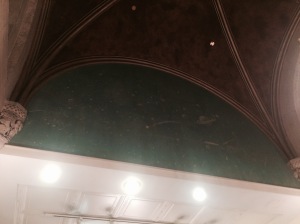 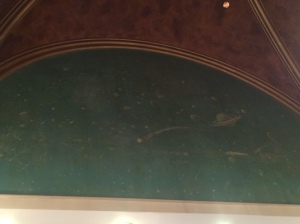 What is it there for? Turns out the area occupied by the store used to be a movie theater! The theater opened in 1937, had a 242-seat capacity and showed mostly newsreels and shorts (catering to commuters). It was closed up in the 40’s and remained so until the 70’s when it was reopened, first as a photography shop and now as a liquor store.

For more info about Andrée and his unfortunate expedition check out “The Ice Balloon” by Alec Wilkinson. For more on John Randel, Jr.’s survey of Manhattan look up “The Measure of Manhattan” by Marguerite Holloway. For more unusual New York tidbits the “non-tourist” guidebook “Secret New York” by T.M. Rives is a fun resource and a fun tool for finding interesting, lesser-known things in New York City.