A while back I did a write-up on the Sterling Lake Mines and the Great West Point Chain that the American troops installed across the Hudson during the Revolution. While that chain gets more of the glory and glamour than most others, it was certainly not the only chain stretched across an American river. In a riverside park just north of the small town of Columbus, KY is Columbus-Belmont State Park, home to the remnants of the Confederate Mississippi River Chain. 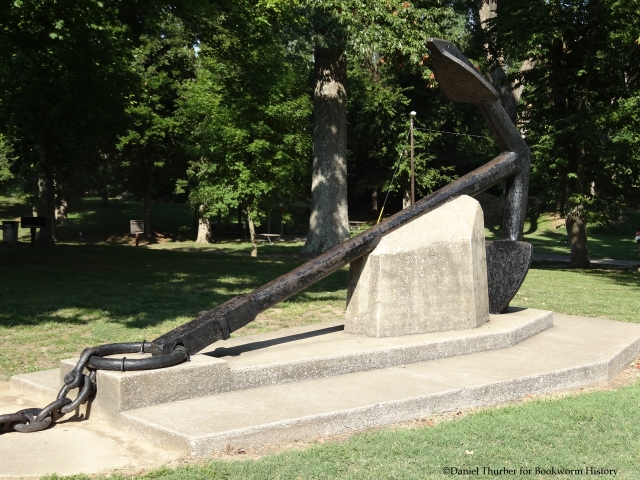 Tennessee seceded in June of 1861, but Kentucky (also a slave state) was determined to remain neutral in the coming conflict. The Confederacy knew that they would have to set up defenses on their major rivers in the west in order to maintain a defensive perimeter and, to that end, invaded neutral Kentucky in September, 1861. This was followed quickly by Northern occupation of Paducah and Louisville, effectively making Kentucky a neutral battleground.

The Confederate fortifications at Columbus were extensive. North of the town were a series of 150-ft bluffs overlooking the Mississippi River and it was here that they set up several artillery batteries, upwards of 140 cannon including 10-inch Columbiad guns and 11-inch howitzers as well as a 128-pound rifled gun the soldiers affectionately dubbed “Lady Polk”, after the wife of their commander General Leonidas Polk (a “128-pound gun” means it fires a shell that weights 128 lbs. It was a BIG gun!).

Across the river, at Belmont, Missouri, the Confederates set up Camp Johnson and between these two fortifications they stretched a chain, supported by pontoons at regular intervals across the river.

Attempting to stem the Confederate reinforcements into Missouri, Brig. General Ulysses S. Grant organized a little over 3,000 men to move against Belmont. Grant, supported by the new gunboats Lexington and Tyler, attacked Camp Johnson early on the morning on November 7, 1861. The Battle of Belmont ended in a draw, with the initiative changing sides periodically. Grant, for whom Belmont was his first Civil War engagement, withdrew under pressure from Confederate reinforcements. Effectively a draw (despite each side claiming glorious victory) the casualties for the opposing armies were about the same.

Following the Confederate surrender of Fort Donelson in February, 1862 (more on that here!) the forces at Columbus withdrew, their position so far north now untenable. The next day, March 3, Federal troops occupied Columbus, taking down most of the chain across the Mississippi.

Even though it was no longer stretched across the River the chain wasn’t completely removed. On the Kentucky side it had been secured by attaching it to a massive cast-iron anchor which was then buried. The anchor is over 15 feet long, with flukes over 6 feet and was buried 11 feet in the ground, kept in place with 12 foot logs, so when Union forces occupied the fort it’s likely they found it easier to just break and sink the chain rather than unearth the anchor that secured it. The Mississippi is constantly shifting and churning and the chain with its anchor were buried and forgotten.

Fast forward to 1925 when a landslide at the bluffs left a section of the chain exposed. Digging revealed the anchor that had previously held the chain in place. Both the remaining chain and the anchor can be seen today at Columbus-Belmont State Park, along with some of the original earthworks from the Confederate fortifications.

The bluffs that once overlooked the river have been gradually carved away by the river and though were once 150′ above the river now are shallow hills. The Camp Johnson site, where the Battle of Belmont was fought, is today mostly farmland as well as a repair station for river barges.

Following the end of the Civil War, troops withdrew, but they left two cannon behind, a Confederate 128-pounder and a smaller 32-pounder. When the Mississippi flooded in 1927 the two guns were swallowed by the river and buried. Using a magnetometer, local historian Eddie Roberts found the 32-pounder, buried at a depth of 42-feet! The cannon, known as #209, is now on display at the park as well.

All information for this piece was found at the Columbus-Belmont State Park, Columbus, KY